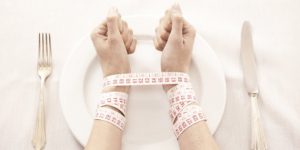 Eating disorders are serious mental health conditions that cause severe disturbances to person’s eating behaviors and can be fatal. Eating disorders have the highest mortality rate of all mental illnesses with a person dying every 62 minutes as a direct result of an eating disorder .

Eating disturbances leading to disorders can be considered an unhealthy diet which means either too much or too little food intake, irregular meal times, poor food choices, obsessions with food, body weight and shape. According to ANAD (National Association of Anorexia Nervosa and Associated Disorders), eating disorders frequently develop during teen years or in young adulthood but may also develop during childhood or later in life. Genetics, environmental factors and personality traits all combine to create risk for an eating disorder.

At least 30 million people in the U.S. of all ages , genders and races are suffering from an eating disorder. It is not only a disorder of adolescence and young adulthood and in fact 13% of women over 50 engage in eating disorder behaviours.

Anorexia Nervosa is characterized by not getting enough calories into one’s body, which leads to a significantly low body weight. The person with Anorexia will also show an intense fear of gaining weight or becoming fat. While suffering from Anorexia Nervosa, a person also has a hard time recognizing the seriousness of their current weight or is unable to see how thin or underweight they are, or the person is very reliant on their body weight and shape for their self-evaluation. People with anorexia nervosa typically weigh themselves repeatedly, severely restrict the amount of food they eat, eat very small quantities and often only certain foods. Anorexia nervosa has the highest mortality rate of any mental disorder. An estimated 0.5 – 3.7% of women will suffer from Anorexia at some point in their lifetime.

Body Dysmorphic Disorder (BDD) is characterized as an obsession with an imaginary defect in physical appearance or an extreme concern with a slight physical blemish, which other individuals may not even recognize. Individuals with BDD have misconceived beliefs regarding their body and the most common body parts for both men and women to have false misconceptions about are skin, hair and nose. Others include eyes, teeth, chin, legs, lips and height.

Bulimia Nervosa is defined as recurrent episodes of binge eating. People with bulimia nervosa often have impulsive episodes of eating very large amounts of food with a sense of lack of control over eating during the episode (a feeling that one cannot stop eating or control what or how much one is eating). Binge-eating is followed by behavior that compensates for the overeating such as purging, use of laxatives/diuretics, fasting, excessive exercise, or a combination of any of these behaviors. Unlike anorexia nervosa, people with bulimia nervosa usually maintain what is considered a normal weight. 1.1 – 4.2% of women have Bulimia in their lifetime.

People with Binge-Eating Disorder lose control over their eating. Binge-eating is not followed by purging, excessive exercise, or restricting. As a result, people with binge-eating disorder often are overweight or obese. Lifetime prevalence of Binge Eating Disorder is 3.5% in women and 2% in men.

All eating disorders are directly linked to body image. Body image reflects how one feels about own appearance and how they see themselves when looking in the mirror which often doesn’t reflect the reality. Body image can be distorted by several factors, like learned beliefs, societal norms, hormonal fluctuations, emotional state, trauma, especially history of sexual abuse. Signs of negative body image include obsessively weighing or looking at self. Comparing self to others, negative self-talk, significant anxiety about own appearance. Body image is directly linked to mental health, as poor body image makes one more vulnerable to coping with various life events and significantly increases symptoms of anxiety and depression.

Initial step is recognizing that one has a problem, the severity of the symptoms, motivation for change, and finally seeking help.

Here is how to know if you have a problem with an eating disorder:
Ask yourself, “What percentage of your day do you spend thinking about food, weight and body image?” If your answer is that you spend so much time with these concerns that it interferes with your happiness or functioning, then we invite you to consider that you may have an eating disorder. Looking at eating disorders this way puts EDs on a continuum, rather than a yes or no question. You can have some degree of unhappiness, depression, anxiety, low self-esteem and preoccupation because of body image and eating issues.

How to help a loved one with an eating disorder:

DO:
• Talk openly and honestly
• Be gentle but firm
• Take the time to listen
• Be honest about your own fear and frustration
• Express your love and support
• Remember that eating disorders are not about the food
• Avoid conflicts and battles of will
• Be patient as recovery can be a long process
• Realise that while your loved one needs help in recovery, they have to want it themselves.

DON’T:
• Try to be a therapist
• Ignore them and the problem
• Be taken in by lies and excuses
• Offer simply solutions (just get over it and eat)
• Blame, shame or guilt
• Threaten with consequences
• Use “you” statements; they sound accusatory
• Try to force someone to eat, stop eating or stop exercising.

For more information on Eating Disorders and treatment options please email us at info@stronghopebarbados.com or call us on +1(246) 433-8221.

Send us an email

info@stronghopebarbados.com
We use cookies to ensure that we give you the best experience on our website. If you continue to use this site we will assume that you are happy with it.Ok